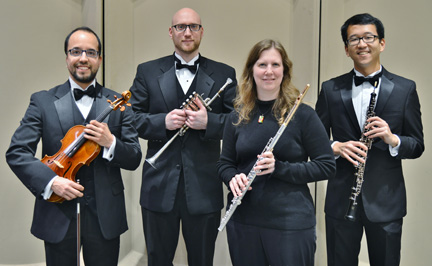 The Baroque meets the Classical Eras, through tonight’s program. Traditionally, our second classics concert features the many talented musicians of SOST. Tonight we’ll hear the brilliance of our soloists, as well as the genius of the classical era’s beloved composers.

Mozart’s fascination with opera buffa mixed his love of comedy with his salient orchestration and string writing in tonight’s Overture to the Marriage of Figaro.

The Brandenburg Concerti were six concert pieces written by Bach for various instrumentalists-chamber music at its finest. These six concerti were collections of various orchestral pieces, assembled and dedicated to Christian Ludwig, Margrave of Brandenburg-Schwedt. Tonight’s Second Concerto is considered one of the most demanding works for clarino trumpet, written for a court trumpeter with exceptional high note virtuosity. Our soloists tonight demonstrate the exceptional talents of our orchestra as soloists and ensemble players. Beethoven’s fiery Seventh Symphony was considered by the composer to be his finest symphony. His audiences were so moved by the second movement, they often demanded an encore before the work was completed. Our marriage of composers is also a marriage of musical styles from Baroque into the Classical.