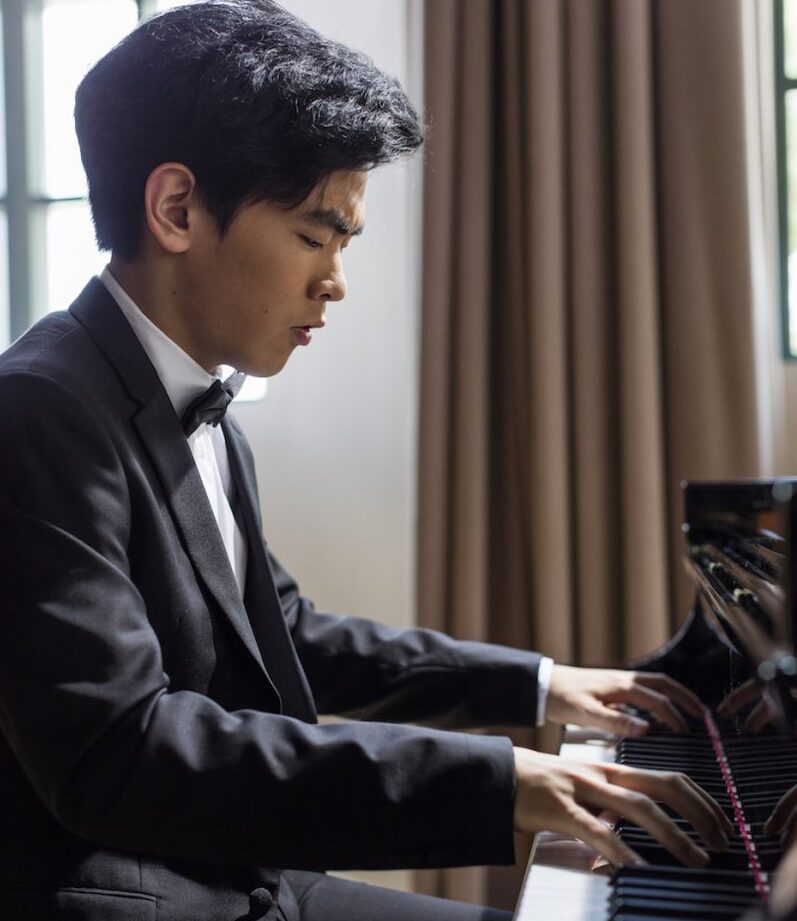 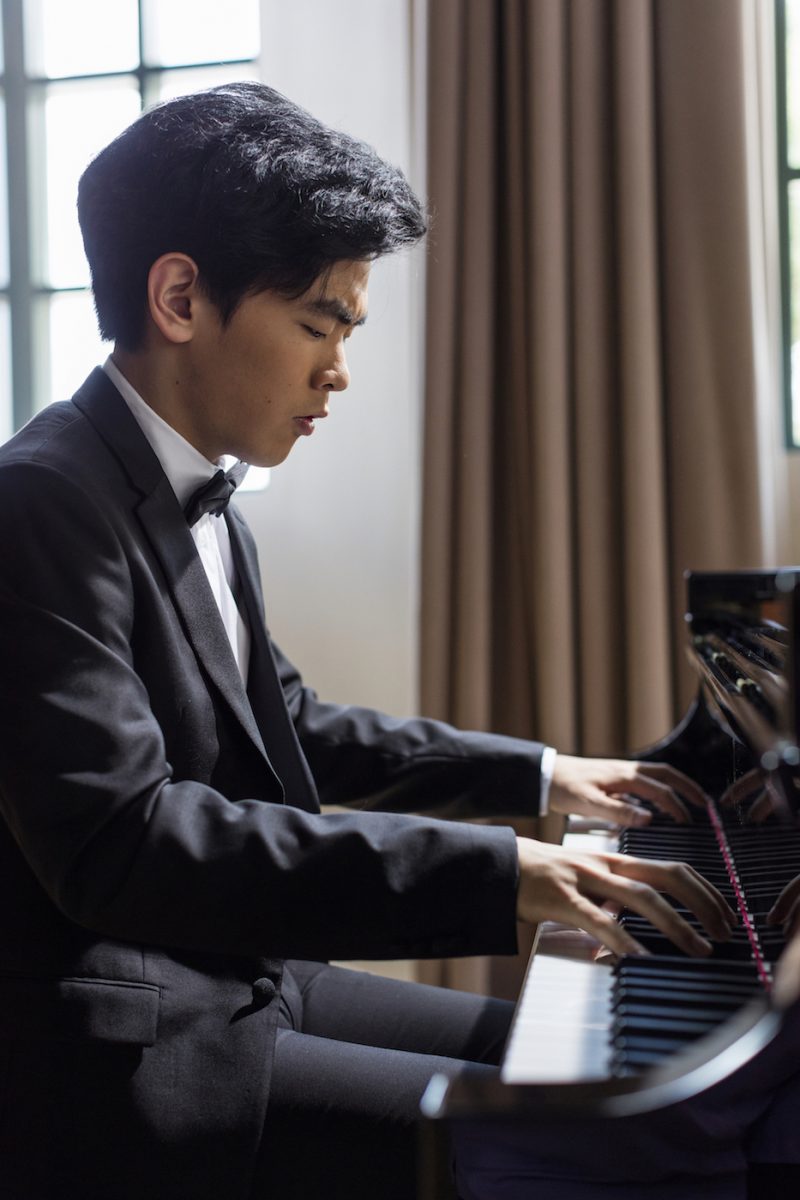 Paul Dukas’ fanfare from the ballet La Peri was one of his best-known works, along with his famous classic The Sorcerer’s Apprentice.  A severe critic of his own works, these two works were among those few he did not destroy.  He composed the one-act ballet, without an overture, yet finished the work with this fanfare.  His compositional style seemed in between Impressionism and Neo-classicism.  Heavily scored for brass, it is no wonder that this fanfare was most frequently performed.

Saint-Saëns’ second piano concerto is a classic example of how setting and musical norms can set the stage for a musical idea.  As a former organist, Saint-Saëns had a great affinity with JS Bach, especially his organ works.  Harmonics, melodic line, and textures all reflect his earliest musical impressions.  Yet, the frivolity of French music makes a dramatic change in the second movement setting the stage for a tumultuous saltarello in typical sonata form.  This popular work is a command force piece for the concert pianist. Our featured artist this evening is Daniel Hsu, the recent Bronze Medal winner of the Cliburn International Piano Competition.  One of the most rigorous of competitions, Daniel won both the commissioned work and chamber music sections of the competition in 2017.  Prior to this was a successive string of international competitions, including the Gilmore Young Artist, the CAG Victor Elmaleh Competition and the Hamamatsu International Competition.  Such a series of successes led to concerti performances with many of the world’s major orchestras.

Our concert continues with Claude Debussy’s Prelude to the Afternoon of a Fawn. Perhaps one of the best-known pieces we hear today, is probably least understood, that is from the composer’s point of view. Debussy viewed this work, inspired by poet Stephane Mallarme, as a sensual setting in Greek and Roman mythology. He strays from the compositional forms of Brahms and Beethoven, using other compositional techniques to create images, moving the work through color imagery rather than thematic structure or sequence.

Igor Stravinsky concludes our concert this evening with yet another sense of mysticism and folk tale, this time from Russia. Firebird Suite takes the tale of Prince Ivan and his struggles to escape from the magical land dominated by Kaschei the Immortal. Ivan uses the Firebird to destroy the egg that is the source of Kaschei’s power.  Stravinsky uses compelling rhythms and tonal chords to build tension, then as the egg is destroyed, thunderous brass and percussion sound, freeing the bird as promised.

While these pieces were selected on their own merits, it is amazing how this period of music drew mightily on myth and imagery of tales from long ago.

Characterized by the Philadelphia Inquirer as a “poet…[with] an expressive edge to his playing that charms, questions, and coaxes,” American pianist Daniel Hsu is increasingly recognized for his easy virtuosity and bold musicianship. He captured the bronze medal and prizes for best performance of both the commissioned work and chamber music at the 2017 Van Cliburn International Piano Competition, and is also a 2016 Gilmore Young Artist, first prize winner of the 2015 CAG Victor Elmaleh Competition, and bronze medalist of the 2015 Hamamatsu International Piano Competition.

A native of the San Francisco Bay Area, Daniel Hsu began taking piano lessons at age 6 with Larisa Kagan. He made his concerto debut with the Fremont Symphony Orchestra at age 8, and his recital debut at the Steinway Society of the Bay Area at age 9, before being accepted into the Curtis Institute of Music at the age of 10, along with his two older siblings. Since then, he has made his debuts with the Philadelphia Orchestra (2016) and Carnegie Hall (2017) as part of the CAG Winners Series at Weill Recital Hall. He has appeared in recitals at the Dame Myra Hess Memorial Concerts, Krannert Center for the Performing Arts, and Gilmore International Keyboard Festival, as well as in Boston, Philadelphia, Chicago, Denver, Los Angeles, Portland, Pittsburgh, and New York. A sensitive and keen collaborator, Daniel has performed with the Tokyo, North Carolina, Grand Rapids, Anchorage, New Haven, and Fort Worth Symphony Orchestras, working alongside conductors Leonard Slatkin, Nicholas McGegan, Cristian Măcelaru, Ruth Reinhardt, Marcelo Lehninger, Eugene Tzigane, and Stilian Kirov.

Recent and upcoming highlights include his debuts with the Taiwan Symphony Orchestra with Hannu Lintu, Eugene Symphony with Francesco Lecce-Chong, and Jacksonville Symphony with Courtney Lewis; chamber tours with Curtis-on-Tour (Europe) and the Verona Quartet (United States); and recitals across the United States and Japan. His Boston debut recital in spring 2019 was hailed as a “powerful, thoughtful, and sensitive program… this deeply inquisitive artist’s inner probing brought fresh meaning to great warhorses, reaching well beyond his stunning mastery of technical difficulties” (Boston Musical Intelligencer).

Daniel’s chamber music performance with the Brentano String Quartet at the Cliburn Competition earned him the Steven de Groote Memorial Award for the Best Performance of Chamber Music. The Dallas Morning News praised “his impassioned, eloquently detailed Franck Quintet,” proclaiming it to be “a boldly molded account, with a natural feeling for the rise and fall of intensity, the give and take of rubato. Both he and the Brentano seemed to be channeling the same life force.” He regularly tours the United States with the Verona Quartet and in duo piano with his brother, Andrew, and appears frequently in chamber music festivals.

Decca Gold released Daniel’s first album featuring live recordings from the Cliburn Competition of Mussorgsky’s Pictures at an Exhibition and Beethoven’s Piano Sonata, op. 110, as well as his award-winning performance of Marc-André Hamelin’s Toccata on “L’homme armé.” He has also been featured in interviews and performances for WQXR, APM’s Performance Today, and Colorado Public Radio, and was profiled as one to watch by International Piano magazine.

Now 22 years old, Daniel graduated from Curtis in spring 2019, where he studied with Gary Graffman, Robert McDonald, and Eleanor Sokoloff. He is a Marvel film buff and enjoys programming—he contributed to the creation of Workflow (now known as Siri Shortcuts), which won the 2015 Apple Design Award and was acquired by the tech giant in 2017.